Bright Side Studios in partnership with lighting and technology specialist – Studiotech have created an experience which encourages connection and plays on the visceral effect of movement using dynamic lighting solutions from Traxon Technologies. Award winning composer and sound designer Pippa Murphy, a long term collaborator with both Bright Side Studios and Janis Claxton has created a soundscape for the exhibition.

a Human Connection is inspired by their work in 2016 when Bright Side Studios & Janis Claxton won a Curiosity Award, supported by Creative Scotland, designed to allow exciting collaborations to stretch artists and creative technologists and to find new ways of opening up the arts to new audiences.

Over the course of 2 weeks in the King’s Theatre rehearsal space, Bright Side Studios directors Susanna Murphy and Cristina Spiteri worked closely with choreographer Janis Claxton and her dancers to explore the intersection between gaming, motion capture technology and dance. Their hope was to create an interactive environment which reacted in real time to movement and put the participant in charge.

The use of Point Cloud allowed Janis and the dancers to see the results as they worked and motion capture suits stored immense amounts of data which Bright Side Studios used to create a representation of the physical movement and a live interactive environment.

The result at that time was AbstrACTION which was featured on BBC Taster and was released on Google Play, as well as being showcased at Future Play, for the Edinburgh Festival.

Bright Side Studios has returned to this experimentation and research and harnessed the beauty and power of this data to create an immersive playground.

The exhibition was about simple, human, pleasures. “We move, we create, we love and we play”…

How we can read the human form, and feel the flow of the movement and emotion from a dancer, even when it has been de-constructed and abstracted? Human data integration, such as a heartbeat, was used in addition to the motion capture to power aspects of the exhibition and to add to the audience’s sense of immersion. 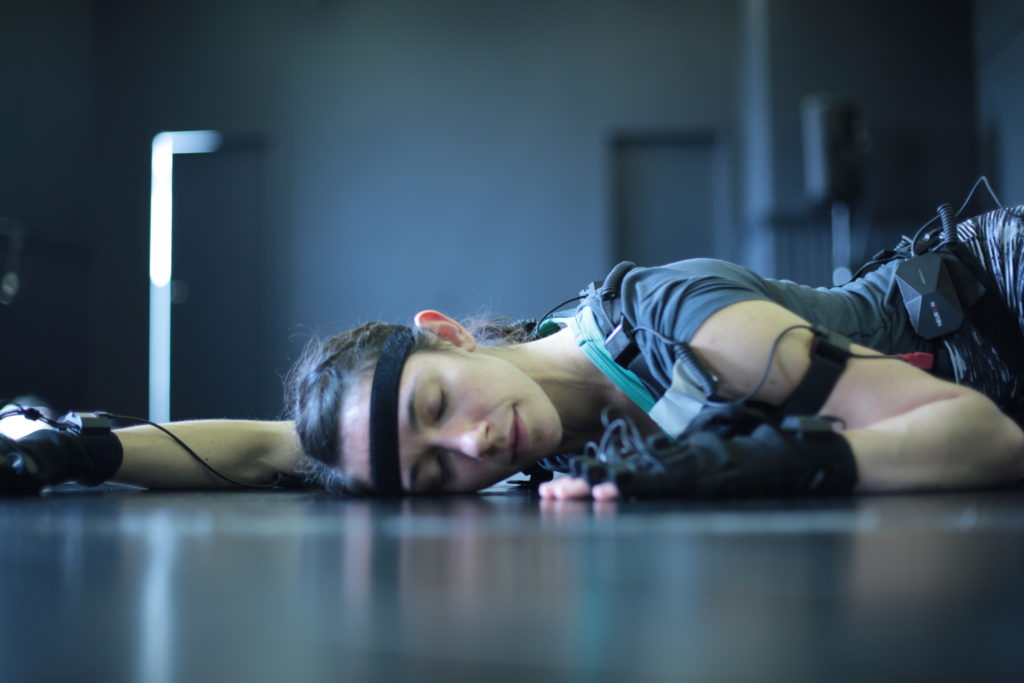